When you visit temples and shrines in Japan you will usually see statues in twos along either sides of pathways and within gates. If one statue has its mouth open and the other its mouth closed, you are looking at agyō (mouth open making the sound “ah”) and ungyō (mouth closed making the sound “un”) statues. At shrines you will often see animals such as foxes or lion-dogs (shishi or koma-inu), at temples Deva Kings are most common though there are lion-dogs at temples as well. These statues are meant to protect the temple or shrine. There are several possible reasons behind the open and closed mouthes, you can read an explanation of some of the possible meanings here in this article on Niō Guardians.

Below you can see the guardian statues that stand watch in Chū-mon. Now that we’ve gotten the introduction of agyō and ungyō statues taken care of, expect some posts introducing other versions of this pair from around Ninna-ji! 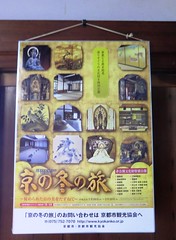